Yasha Mounk’s text “German, Jewish and Neither” (NY Times) about his life as a Jew in Germany and personal and communal identity, went viral on facebook.
Some Jews living in Germany experienced nearly the same or were astonished about Mounk’s conclusions.

Mounk experienced the rise of philo-Semitism in the 1980s and early 1990s, a time, when the Jewish population was on the decline.
In the 1990s the first immigrants from all countries of the former Soviet Union entered the communities – life-extending measures for Judaism in Germany, but not a proper countermeasure to establish a vibrant Jewish community for decades to come. Actually, the Jewish Community shrinks again. 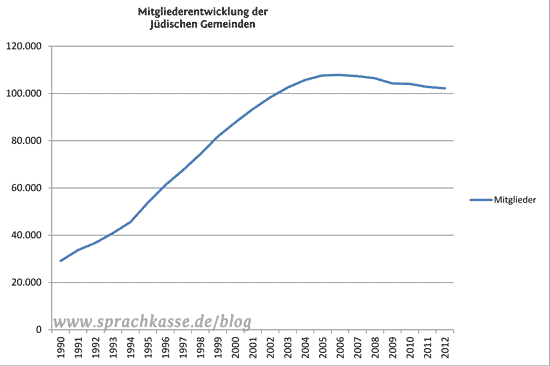 Members of Jewish Communities in Germany up to 2012

The philo-Semitism of these years created a peculiar image of Germany’s Jews. All the Klezmer bands and Jewish Culture festivals without Jews created a Pseudo-Jewish-presence in Germany. The ordinary German must have thought, there are Millions of Jews in Germany, just because of the high frequency of cultural events.
Judith Kessler (Berlin) coined the term “Jewish Disneyland” to describe this phenomenon. But there were some inhabitants of “Jewish Disneyland” who were actually Jewish. Strange enough, they had to find their place behind the scenes of the funfair. Along the way, the mainstream created an “ideal Jew”, with special attributes.
Imagine what happened, when the actual “Jew” did not meet the expectations of his non-Jewish Co-Germans!? The strong disappointment of the people can be annoying for both sides.

The non-Jewish German expected another Jew:
He had to be intelligent, better an intellectual, religious (or at least, an expert for all kinds of abstruse questions), a Violin-player or musician in general. Always with “this special kind of humor”. In some cases people expected a slight Yiddish accent. Or people expected a good pat on the back when people spoke about how their grandparents hid Jews on their attic. If you sum up all the figures, you’ll have the impression millions of Jews survived the Shoah (on attics).

An interesting side effect was that some non-Jews are considered Jewish in the eyes of the average German simply because he is an outspoken intellectual or matches one of the “typical” prejudices. One example is the the polarizing columnist Harald Martenstein, who writes for the weekly “Die Zeit”, sometimes his articles show a sense of humor. He is considered to be Jewish.

If you are a Jew, People will tell you a zillion times that you are a German Jew and not a Jew in Germany, that Judaism is a part of Germany’s cultural heritage, but they still maintain your feeling of “not being in the inner-circle” of society. Paradoxically you are socially engaged, but still “the Jew” not simply “a Jew”. Open anti-Semitism is easier to deal with, because you are part of direct communication. A clear “I don’t like you” is easier to live with.
But there is one “undocumented” facet of this special relationship:
Jews who actually liked their place in the Jewish Disneyland or still like it.
Why?
Because it creates public attention.
The public demands an easy to handle public (Jewish) figure and some are willing to offer such a personality. You can do a tour telling “Jewish fairytales” or be an expert of Judaism to a non-jewish public, even if you are a low performer. The same for novels. Write an awful piece: You are Jewish, that’s sufficient. You’ll find your audience and they will adore you. And some people like it to be adored. At the same, these persons are fueling the image of the “ideal Jew”. I guess, this is a character Mounk did not mention.

But every time a Jew does not fit the expectations, he is target to old-school anti-Semitism. Michel Friedman for example was vice president of the Central Council of Jews in Germany and not one of those, who wanted to be loved by the public. When Friedman had been accused of offering cocaine to Ukrainian prostitutes, he was target of massive anti-semitic scoff. As long as everybody is inconspicuous there is no problem, but if Jews demand to keep the circumcision, things are getting rough.

To draw a comparison: Germany for Jews is like Hawaii. On the surface, everything is excellent and sunny. You can spend a marvelous time. The place is almost a paradise. But beneath the surface is a constant flow of lava and the crust of the earth is thin .The likelihood to experience an eruption is high.
We experienced some small eruptions in the past: Shechita, circumcision, a debate about drawing a line under the “shoah issue”.

Yasha Mounk wrote a whole book about his situation. It will be translated, for sure. And he will be invited to present his book to a German audience. Public attraction is guaranteed.